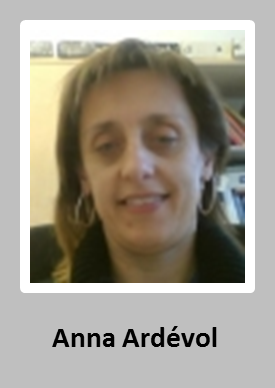 University Professor of the Rovira i Virgili University. She has more than 100 papers published in international journals indexed according to JCR (number of average citations per article of 19.29). Her H factor is 26. She has been responsible for four research projects funded by MINECO. She has directed and co-directed up to 6 doctoral theses, all with a European/International Doctoral Degree. She has been recognized by four consecutive six-year research periods (last one: 2010-2015).

In the teaching field, she has five five-years teaching periods in Bachelor and Master Degrees courses. She has developed management duties as coordinator of Master and Doctorate in the URV for six years, secretary of Department and Vice-rector of International Relations in the URV.

Her research has been for years around the bioactivity of proanthocyanidins, phenolic compounds widely distributed in nature (fruits, vegetables) which have been described as protecting against cardiovascular diseases, cancer and inflammatory diseases.

Her work has supported the activity of these compounds as specific natural signals through which nature coordinates with the human body, the adipose tissue and, the endocrine System.. Her work has supported the bioactivity of these molecules as protective against some disruption of glucose homeostasis, a field which has previously been little explored.