MoBioFood recently published an article in Food and Function Journal!!

Grape seed proanthocyanidin extract (GSPE) modulates several parameters involved in metabolic syndrome. GSPE is a mixture of compounds, some which are rapidly absorbed, while others remain in the lumen where they might have effects that are translated to the whole organism. Our aim was to decipher if the 8-day treatment of GSPE, previously shown to reduce food intake, induces changes in the microbiota and enterohormone secretion. The ratio of Firmicutes?:?Bacteroidetes was lower in the microbiota of GSPE-treated rats compared to controls, and differences in several taxonomic families and genera were observed. Such modulation led to a reduction in cecal butyrate content. GSPE also increased plasma glucagon-like-peptide-1 (GLP-1). Gallic acid did not induce major changes in the microbiota profile nor in GLP-1 secretion. Correlations between several microbiota taxa and plasma triacylglycerol, adiposity, and enterohormones were observed. Modulation of microbiota may be one of the mechanism by which GSPE impacts metabolic health. 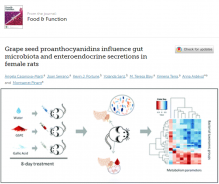