In the last decade, there has been an increasing prevalence of obesity and metabolic-associated diseases. In view of this fact, finding preventive therapies, as well as treatments for these diseases is of great interest for public health. Gut hormones secreted from enteroendocrine cells (EECs) play a key role in the regulation of food intake and glucose homeostasis. In this context, the research of this thesis has focused on the role of natural bioactive compounds on the enteroendocrine system.

Our research group reported in previous studies that grape seed proanthocyanidin extract (GSPE) increased GLP-1 plasma levels in rats. In this thesis, we elucidated that such increase might be in part explained by the direct action of GSPE on enteroendocrine cells. Moreover, we demonstrate that GSPE also modulates the secretion of the main gut hormones by directly acting on EECs, inducing an increase of GIP and PYY release, while reducing CCK release.

The results obtained in this thesis using organoids culture demonstrated that GSPE up-regulate the main markers of L-cell and modulate transcription factors involved in L-cell differentiation, and thereby point out that the promotion of L-cell differentiation is a mechanism by which GSPE act in prolonged treatments. Moreover, our findings in mid-term treatments revealed that gut microbiota composition is modulated by GSPE and such microbial composition profile correlates with host metabolic parameters, and remarkably with increased active GLP-1 plasma levels.

Furthermore, we found a new source of natural bioactive compounds from chicken feet protein, chicken feet hydrolyzate, and demonstrated that it acts as antihyperglycemic agent in disrupted-glucose homeostasis animals due to the capacity of inhibiting DPP-IV activity and enhancing endogenous GLP-1 release .

In conclusion, the findings obtained in this thesis show that natural bioactive compounds act through different mechanisms on the enteroendocrine system, and thereby could be good therapeutic agents to treat obesity and glucose homeostasis disruption. 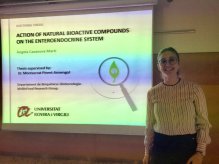