Due to health issues associated to overweight and obesity, part of current research has focused in the development of therapies to reduce food intake through modulation of certain gastrointestinal hormones with important effects on appetite. In this regard, our research group previously observed that the administration of an extract of proanthocyanidlns from grape seeds (GSPE) increases the production of the intestinal hormone GLP- l in rats, which is associated with a decrease in appetite. This led us to hypothesize that the administration of this extract in rats would influence the secretion of major gastrointestinal hormones, thus influencing food intake.

Early acute studies with male rats confirmed a satiating effect of GSPE with the same dose that was previously described to increase GLP-1. Smaller doses showed satiating effects from 0.35g/kg, when administered before the first meal. Similar results were observed with both male rats and rats subjected to a high-caloric, highly appetitive diet. In subchronic treatments of 8 consecutive days, both the dose of 1g/kg and 0.5g/kg GSPE maintained a similar satiating effect throughout the experiment with similarly reduced body weight and hindered nutrient absorption. In a second subchronic treatment the dose of O.5g1kg kept presenting its satiating effect and reduced body weight, while the dose of 1g/kg had no effect at an. Furthermore, the group treated with 0.5g/kg GSPE burnt more energy and fat than the control group, an effect not observed in the 1g/kg group.

Acutely, the administration of GSPE increased the levels of GLP-1 as well as decreased CCK and increased ghrelin, an appetite-inducing hormone. Conversely, in subchronic studies with 0.5 or 1g/kg GSPE ghrelin was reduced after 24h of the last dose, both at plasma and gene expression levels. Given the importance of this hormone, we screened the effects of different compounds of GSPE in ghrelin secretion in a ghrelin-producing cell line. Monomeric flavanols stimulate the secretion of ghrelin through interaction with bitter taste receptors, a fact that could explain the observed increase in plasma ghrelin after acute treatments and at short-term after a subchronic treatment with GSPE. Moreover, both GSPE, proanthocyanidins and gallic acid inhibit the secretion of ghrelin. For GSPE, we observed similar inhibitory effects working with segments of intestinal tissue we observed that gallic acid also inhibited the secretion of ghrelin in segments of intestinal tissue and in plasma of rats just after the last dose of an 8-day study. Despite this fact, intake studies on this compound showed a gradual adaptation and a total loss of effect, emphasizing the importance of remaining compounds of GSPE.

Studying the role of these hormones in the satiating effect-observed, we found that the acute effects of GSPE and gallic acid are blocked by prior administration of an antagonist of the GLP-1 receptor. Subchronically, we have observed that the decrease in ghrelin and an increased GLP-1 signalling in the hypothalamus are related to the decrease in food intake in the 0.5g/kg group, as well as the increase of lipolytic activity in subcutaneous adipose tissue. Moreover, these results indicate a counter-regulation of hypothalamic anorexigenic hormones towards excessive GLP-1 signalling, which would explain the resistance to the treatment in the 1g/kg group.

In conclusion, in the studies presented in thesis point out that GSPE has a satiating effect in rats under a proper dosage through its effects on ghrelin and GLP-1 signalling. 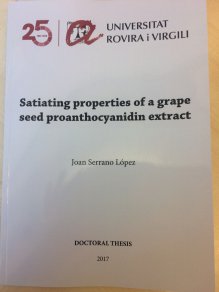