Title of the project: Bioactivity of flavanols in the gastrointestinal wall: enteroendocrine and immunoprotective effects to  prevent Metabolic Syndrome.

This is a project in the area of improving health through food which continues the previous project. We intend to evolve the hypothesis that supported it: the flavanols exert part of their bioactivity due to its interaction with enteroendocrine cells of the gastrointestinal tract. In fact, we have shown the action of a grape seed extract on the action of hormone GLP-1, and it has been defined an acute dosage of extract with satiating action. Such action on enteroendocrine system requires a more detailed physiological study to assess whether it can be applied as a chronic therapy in pathological conditions. Also a more detailed study at mechanistic level is needed, because it also may be due to the action of flavanols on other enteroendocrine signals. Furthermore, in this project we intend to complement the study with analysis of the the anti-inflammatory properties of flavanols in the gastrointestinal tract. It is an unexplored field and very promising given the already demonstrated anti-inflammatory capacity of flavonoids in other tissues, which may contribute to improve the overall functionality of the organism.

The team, that support this application, has experience in both fields; therefore in this project is presented as hypothesis that "flavanols, through its interaction with enteroendocrine and immunoprotective functions of the gastrointestinal tract wall may, prior to absorption, condition the function of the body so that they could be useful in preventing pathologies associated with the metabolic syndrome, in particular, insulin resistance, obesity and inflammation".

We propose to resolve this hypothesis firstly in experimental animals. As a first objetive we will select the chronic dose of grape seed extract which is more bioactive; and their effects in different experimental animal models. The second objective will identify the time of administration that is most suitable to avoid the complications caused by a hyperphagic diet, associated with the metabolic syndrome. This objective will be explored in understanding the mechanisms involved at the level of the different gastrointestinal sections.

The study was completed by two approaches with in vitro and ex vivo models. The third objective is intended to identify bioactive molecules in histotypic models of  enteroendocrine and entero-inflammatory system, working with different extracts, products of digestion in each of its stages, as well as pure molecules. This analysis of bioactivity and molecular mechanisms will be completed by the fourth objective where the results obtained with the response of cells and human ileal mucosa of the same molecules digested and checked against colon.

Thus, the approach presented contributes to evolve in order to design food formulations, or dietary advice that helps to create healthier eating habits. This approach allows us to obtain complementary evidence of the applicability of these formulations in elderly populations, a situation increasingly common in European populations. 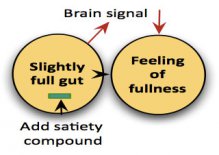