Effects of flavonoids on intestinal inflammation, barrier integrity and changes in gut microbiota during diet-induced obesity.

It is now widely accepted that obesity is associated with low-grade chronic inflammation, which contributes to an increased risk of insulin resistance and type 2 diabetes mellitus, as well as other detrimental health consequences linked to obesity. Although prior studies have implicated the adipose tissue as being primarily responsible for obesity-associated inflammation, the latest discoveries have correlated impairments in intestinal immune homeostasis and the mucosal barrier with increased activation of the inflammatory pathways and the development of insulin resistance. Therefore, it is essential to define the mechanisms underlying the obesity-associated gut alterations to develop therapies to prevent and treat obesity and its associated diseases. Flavonoids appear to be promising candidates among the natural preventive treatments that have been identified to date. They have been shown to protect against several diseases, including CVD and various cancers. Furthermore, they have clear anti-inflammatory properties, which have primarily been evaluated in non-intestinal models. At present, a growing body of evidence suggests that flavonoids could exert a protective role against obesity-associated pathologies by modulating inflammatory-related cellular events in the intestine and/or the composition of the microbiota populations. The present paper will review the literature to date that has described the protective effects of flavonoids on intestinal inflammation, barrier integrity and gut microbiota in studies conducted using in vivo and in vitro models. 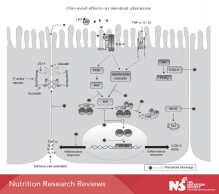 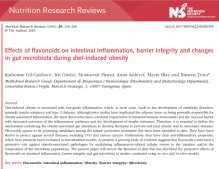