MoBioFood has a new researcher!!

The main topic of her PhD, carried out in Biomedical Research Unit (URB-CRB) was the study of the connection between inflammation and energy metabolism in diseases such as obesity and non-alcoholic fatty liver disease, mainly searching for new biomarkers and for novel therapeutic strategies. During her PhD training, she moved to Albert Einstein College of Medicine of Yeshiva University in New York.

On 2015, she was employed as a post-doctoral researcher at Infection and Immunity Research Group (INIM) (HJ23) of Institut d'Investigació Sanitària (2015-2019). Her main research priority was the study of the role of inflammation and metabolic disturbances in HIV infection.

Finally, she has been visiting professor in the Department of Biochemistry and Biotechnology at Universitat Rovira i Virgili since 2019.

This research work has led to three industrial and intellectual properties and 39 outstanding publications in international journals indexed with 793 citations that give an h index of 16 according to the Web of Science (October 2019). 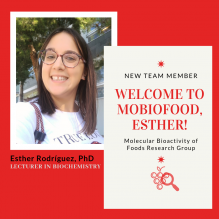